Written and Submitted By Chris Mitchel

In early 2002, I received a call from Greg Wilson, asking, "Do you want to go to China?" "Sure," I replied, without hesitation. However, as Greg told me the details about the China tour, I realized this meant a great deal of work. Heading to China would be two 40-foot containers with over 30 illusions, many large set pieces, and between 15 to 20 backdrops and curtains, making it one of the largest touring magic Illusion shows in the world.

In addition to the physical stuff of the show, Greg also put together an impressive on-stage cast of 12 artists from the USA and Russia, and a large creative/technical crew from all over the States. Greg's brother Mike Wilson (the little kid on the Allakazam shows) and his company I.S.A. Ltd. (International Special Attractions, the executive producers of the tour) not only organized the tour and the management team in China, including three interpreters dedicated to the show, but also the large crews of local Chinese labor at each venue.

I anticipated an adventure, since I have toured with Greg many times in the United States. But performing overseas presented a whole new world of challenges. I have many amazing memories from the U.S. tours alone, enough to last a lifetime... like driving a truck and 25 foot trailer across a solid ice highway in Nebraska in February... changing trailer tires in the middle of a Missouri summer while ticks are jumping up our pantlegs.... or, high winds pushing the trailer out from behind us and causing the truck and trailer to travel down Interstate 10 sideways. Wheeeee! 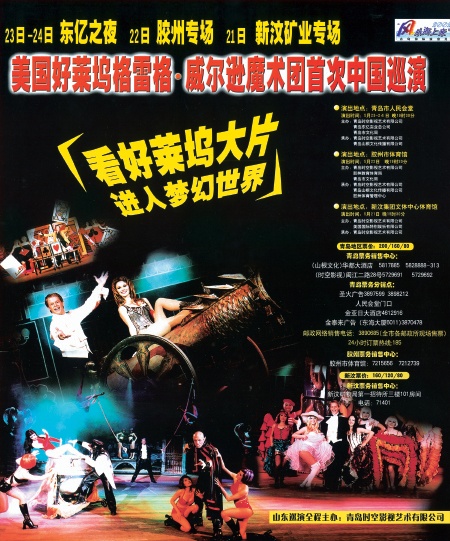 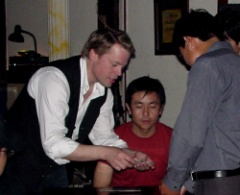 Show business requires a dedication that the audience never sees. The traveling magic illusion show is a blending of touring theater and circus. Everyone in the production contributes more than just their performance. Greg will handle all the pre-production demands, then the rest of the team will assist with the other chores. For example, time allowing, I often help Greg actually drive the show props to the theater, be it around the corner or across the country. Fortunately, we had four big trucks and a giant tour bus with local drivers for the China tour.

Touring with the illusion show is sometimes grueling, but always rewarding. China took the good and bad parts of touring to a whole new level. We opened 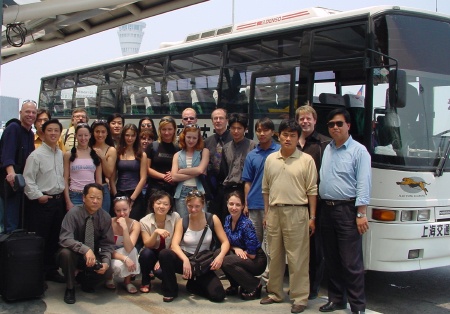 on April 20th, I arrived with Michael McGiveney, the show's technical director, and Katherine Hope, the choreographer. Greg Wilson (the head honcho) and Hugo Wei, Greg's assistant producer, had been in Shanghai for one week, frantically preparing and purchasing supplies. The seven Russian dancers would arrive in a few days and John Grantham, who portrays the evil demon, could not come until mere days before opening night.

Everyone had done their homework. But despite all the pre-production efforts, we still had to assemble the show in China, mainly, because the cast and crew came from around the globe. Believe it or not, we only had two weeks to complete the production process. It seemed impossible with so many illusions, dance numbers, costume fittings and fabrication, music editing and prop re-furbishment, all in a foreign land with a whole new foreign team. Ready, set, go...

For the rehearsal period, the cast and crew were at a decent hotel in Pudong, just outside of Shanghai. During those two weeks we didn't see much of China except the road from the hotel to the rehearsal hall. And the rehearsal hall itself was a unique place to work. It consisted of a former warehouse used to store and sell produce. The ISA team did their best to install a wood floor, mirrors, and lights for the dancers. With the exception of one day, the weather was gray and dismal. And, unfortunately, there was not much to be done about the mosquitoes who brought all their friends to dine on us, the foreign buffet.

We ate, slept and rehearsed. Local Chinese workers were hired to work on the props, that is, the props that were there. The second forty-foot container of illusions was delayed getting through customs. Theoretically, it would arrive the day before we loaded into our first theater. Time was running out. Props weren't ready, costumes needed re-fitting, and whole sections of the show still needed blocking. And what... give up show business? 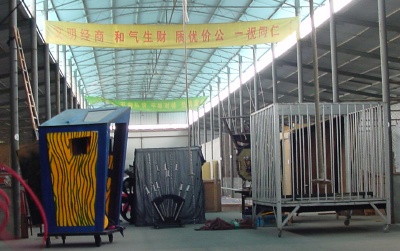 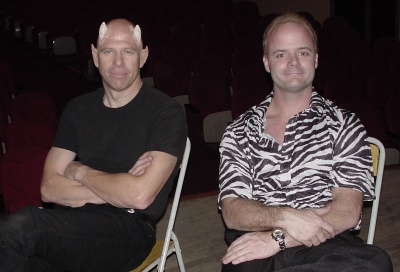 Eat, Our final dress rehearsal was like a train wreck. Their computer controlled fly system had scenery and curtains flying in and out at random... There were logistical problems getting 30+ illusions on and off stage... Cues were missed and sometimes things just came to a grinding halt. Stress was high, we opened in a few hours. Greg and producers were, at the very least, concerned.

You see, for every cue to happen, every light to be focused and virtually every prop to be moved, the cues needed to be translated into the three different languages of our team. Not only does this process take time, sometimes there is no time. And Greg was the only one who understood English, Russian, and Chinese. He did his best to solve the problems and ease the promoters fears. Michael McGiveney said many times, "The real magic is the show itself, not the individual tricks. So stay focused and together we can all do some magic!"

At this point, the show is out of any one persons control. Every single worker, from the spotlight operator to the person pushing the props around, has to focus and get the job done. On this particular night, the magic happened! When the show ended, the crowd applauded and cheered... the curtain closed... and the reporters asked for interviews... The show was a big success! I was more than relieved, I was surprised, and downright shocked. But the tour had only begun, surprise and shock would prove to be the norm for the next two months.